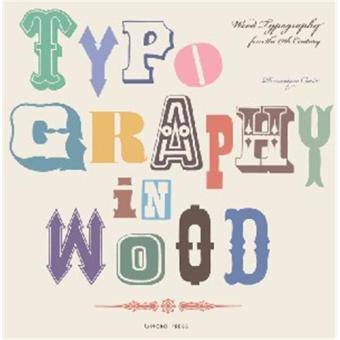 TYPOGRAPHY IN WOOD - WOOD TYPOGRAPHY FROM THE 19TH CENTURY /ANGLAIS

Typography In Wood - Wood Typography From The 19Th Century /Anglais

The first wooden letters for poster work were crafted in the 18th century. With the advent of mechanical reproduction and widespread commercial advertising in the 1820s, there is an amplified desire for new types with increased visibility — “Norman” letters with solid downstrokes, “antiques” or lineals without serifs, and “Egyptian” types with heavy rectangular serifs.
“Specimen de caracteres en bois de la maison Bonnet” dates from the 1860s — a period when the flourish of Romantic phantasmagoria was on the decline in the structure of the letter but still prevalent in its outlines; type design was beginning to borrow from the architectural eclecticism of the age, and sometimes resembled wrought ironwork.
Further developments, define a series of surprisingly ‘modern’ types that are similar to those generated by the digital typography of today and that could effortlessly be included in the contemporary typography pantheon.
The book includes a CD.
S'identifier pour envoyer des commentaires.